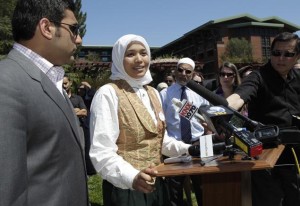 To ensure that employers do not feign an “accommodation” by hiding an employee who wears certain religious dress in a back room, away from the public and the rest of the employees, AB 1964 added Government Code section 12940(l)(2), which makes clear that “an accommodation of an individual’s religious dress practice or religious grooming practice is not reasonable if the accommodation requires segregation of the individual from other employees or the public.” (emphasis added).

This issue was widely publicized in a recent Orange County-based lawsuit against Walt Disney Company, where a Muslim employee alleged that Disney failed to accommodate her religious dress in the workplace and instead told her to remove her hijab, cover it with a hat, or work in a position out of public sight.

On a similar note, in early September 2013, a Federal judge ruled that Abercrombie & Fitch violated anti-discrimination laws when it fired a female Muslim employee for refusing to remove her headscarf (hijab) at work.  In this case, the employee was told that she could not wear her hijab on the job because it violated the company’s “all-American look” policy.  This lawsuit is only one of several discrimination cases filed against Abercrombie concerning issues such as failure to accommodate religious dress and exclusion of African American, Asian America, and Latino workers from hire and promotion.