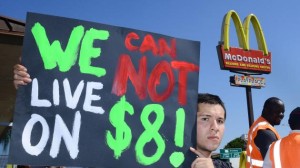 Orange County Minimum Wage Lawyer:  This morning, Gov. Jerry Brown signed legislation to raise California’s minimum wage from $8 an hour to $10 an hour within three years, making it among the highest in the country in 2016.  The minimum wage will be raised in separate increments –to $9 an hour on July 1, 2014, then to $10 an hour on January 1, 2016 – but will not be adjusted to inflation.  According to recent studies, a solid majority of Americans support increasing the minimum wage to $10 per hour in 2014 and adjusting it each year to keep pace with the cost of living.

California’s minimum wage lingered at $8 an hour since 2008, when the hourly minimum was raised by merely 50 cents.

This minimum wage increase is in line with the rising cost of living in California and is expected to help workers recover from the ill effects of the recession and also stimulate the economy, since workers who earn more, spend more.  With this modest increase, millions of California’s hardworking employees who currently work for minimum wage may be able to make ends meet with less public assistance.

Notably, San Francisco and San Jose have already implemented citywide hourly minimums of $10.55 an hour and $10 an hour, respectively, and studies have found that raising the minimum wage does not have any meaningful adverse impact on jobs.

If your employer is paying you less than the California state minimum wage, you should contact a minimum wage attorney at Workplace Justice Advocates, a Professional Law Corporation.