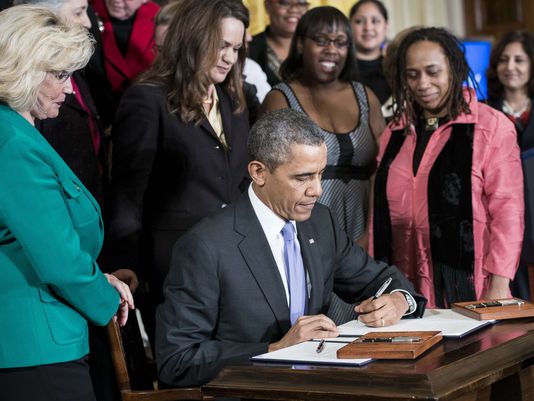 These amendments make it illegal to harass or terminate employees based on their sexual orientation or gender identity, which would include transgender individuals.

California law already prohibits LGBT discrimination and harassment under the Fair Employment and Housing Act (FEHA) codified as Government Code Section 12940, which states that “It is an unlawful employment practice . . . for an employer, because of . . . sex, gender, gender identity, gender expression . . .  to discharge the person from employment . . . or to discriminate against the person in compensation or in terms, conditions, or privileges of employment.”

There are still 32 states where LGBT discrimination is legal, however, the President’s order will at least provide relief to an estimated 28 million workers (about one fifth of all employees in the United States) who are either federal government employees or employees of companies that contract with the federal government – about 24,000 companies according to Huffington Post.

Before signing the order, President Obama stated that “America’s federal contracts should not subsidize discrimination against the American people.” The President also remarked that “In too many states and in too many workplaces, simply being gay, lesbian, bisexual or transgender can still be a fireable offense.”

It appears the President has taken the matter into his own hands after pushing Congress to pass a nationwide law prohibiting LGBT discrimination, referred to as the Employment Non-Discrimination Act (ENDA), for the past several years.

House Speaker John Boehner has also repeatedly voiced his intent to block the ENDA from passing the House, stating that the law is “unnecessary . . . would provide a basis for frivolous lawsuits,” and that LGBT citizens “are already protected in the workplace.” However, Mr. Boehner did not identify what law or laws “already protect” against LGBT discrimination on a national level – likely because such a law does not exist, which is why 32 states (including Mr. Boehner’s home state of Ohio) still allow LGBT discrimination in employment.

Notably, the President did not include a any exemption for religious organizations that most states, including California, have in effect. The exemption applies to religious non-profit corporations and allows them to discriminate against employees for any of the protected reasons listed in FEHA, including sexual orientation, gender, disability and even color or race. The President opted not to include this exemption despite being urged to do so by certain religious leaders and organizations. However, a 2002 executive order signed by President George W. Bush remains unchanged and still allows religious organizations to discriminate based on religious beliefs.