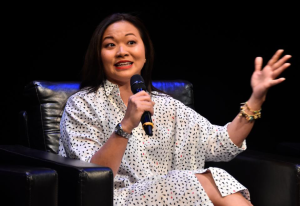 The film Crazy Rich Asians, which opened number one at the box office, raised Asian representation in Hollywood to new heights.  Now, about a year later, co-writer Adele Lim is no longer involved with the sequel due to significant pay disparity. Co-writer Peter Chiarelli was to be paid a significantly higher amount than Lim—starting offers were $800,000 to $1 million for Chiarelli, and about $110,000 for Lim, who was told that these quotes are industry-standard ranges based on experience.  Months later, Lim was offered a higher amount, and Chiarelli volunteered to split his fee with her, but Lim passed on the offer.

Evidently, the gender pay gap still persists today.  In 2019, women in the U.S. earn 79 cents for every dollar earned by men. In other words, the median salary for men is approximately 21% higher than the median salary for women.  Although these statistics show a 1% improvement from 2018 and a 5% improvement from 2015, anything below equal to what men are paid is still too low.

California now has the narrowest gender pay gap in the country according to statistics from the U.S. Census Bureau, but women in California are still being paid less than men at 89 cents for every dollar paid to a man.  In 2017, the California Equal Pay Act was amended to include that employers could not rely on prior pay to set salaries.  In 2018, the law was amended again to include that employers could no longer ask about potential employee’s previous salary.  Nonetheless, the gap remains.

Workplace Justice Advocates, PLC has extensive experience successfully litigating cases involving gender pay disparity and gender discrimination claims on behalf of affected employees.  In fact, WJA is currently in the process of litigating a case on behalf of an employee who was the victim of violations of the Equal Pay Act and sex discrimination.  WJA is committed to holding employers accountable and advocating for workers’ rights!